Indigenous communities across Guatemala came together to bring the country to a standstill, blockading major crossroads and highways. This nationwide peaceful demonstration was protesting against the Guatemalan congress’s rejection of a constitutional reform that would legally recognise indigenous justice as part of the country’s judicial system.

Guatemala’s Constitutional Court has accepted some rulings by indigenous courts and there’s a move to formally amend the country’s constitution to recognise them.

The idea has gained support from Attorney General, Thelma Aldana, as well as Iván Velásquez, who heads the U.N. Commission Against Impunity in Guatemala that has been assisting in corruption investigations in the country.

“Guatemala has to be a place where all its inhabitants belong,” said Velázquez, who visited Sololá to view the court process.
The formal legal system has often exploited or ignored indigenous Guatemalans, who were legally required to perform forced labour well into the 20th century and who generally found it nearly impossible to pay for lawyers.

An estimated 60 percent, or more than 6 million inhabitants, make up Guatemala’s population. Yet indigenous systems of justice, wherein local authorities rule on community issues, have been looked down upon by a country that continues to hugely discriminate against its majority indigenous population. The reforms face opposition from conservatives and major businesses that control most of Guatemala’s land and economy. Although many of these business interests campaigned against the reforms under the guise of fearing “legal confusion,” indigenous activists and leaders at the protests describe the opposition as deriving from a fear of losing any of their elite power to those who have been oppressed and exploited for centuries. 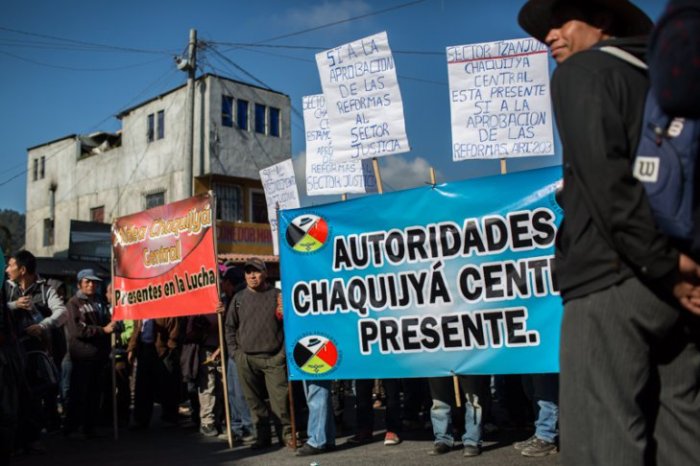 For some background, you can read this piece in the New York Times and you can read the full article by Anna Watts here, in the Intercontinental Cry website, including more of her photographs.