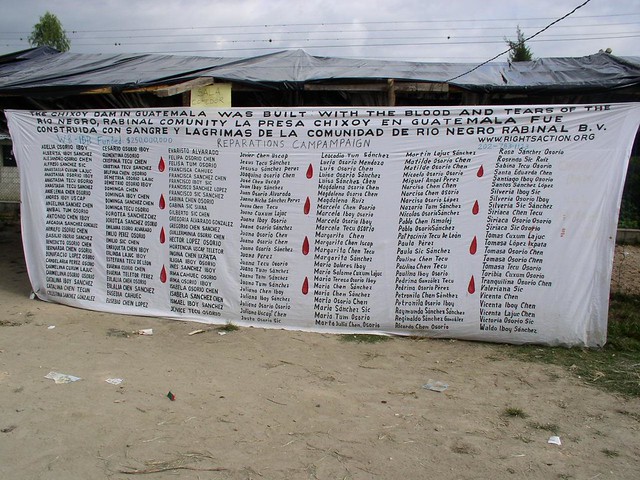 This picture is part of a set of photographs from International Rivers website here.

For more than twenty years, communities affected by the Chixoy Dam have demanded reparations for the damages caused by the project, which was built during Guatemala’s most repressive military dictatorship. The project, financed by the World Bank and the Inter-American Development Bank, was built on the Chixoy River in the early 1980s and forcibly displaced more than 3,500 Maya community members. More than 6,000 families living in the area also suffered loss of land and livelihoods. When community members opposed relocation and sought better compensation, they were massacred, tortured and kidnapped. For years survivors have lived in extreme poverty but never given up their call for justice.

On April 10, 2010 after a decades-long struggle, the ‘Reparations Plan for Damages Suffered by the Communities Affected by the Construction of the Chixoy Dam’ was finally signed and agreed to by all parties, which involved the participation and approval of communities and the government. This was a huge victory for the communities.

However, the Guatemala government has refused to sign the legal agreement which would make the reparations plan binding, and ensure its completion.

On January 16, 2014, history was made. The US Congress passed the 2014 ‘US Consolidated Appropriations Bill’, which instructs the US directors of the World Bank and Inter-American Development Bank – which both financed construction of the Chixoy Dam – to “report … on the steps being taken by such institutions to support implementation of the April 2010 ‘Reparation Plan for Damages Suffered by the Communities Affected by the Construction of the Chixoy Hydroelectric Dam in Guatemala’”.

You can read the full piece and follow the news of the ongoing struggle here.

Also, this piece from Rights Action about the ‘U.S. Government Holding World Bank and IADB Accountable to Ensure Reparations for Chixoy Dam Victims in Guatemala’ was posted on Upside Down World.