Elections and the Guatemala Spring 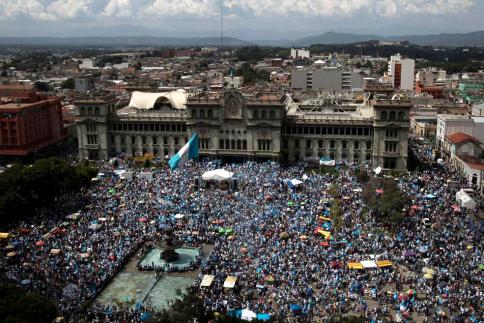 The crowds in front of the Presidential Palace on the 27th August 2015 calling on the President to resign. Photograph by Sandra Sebastián from Plaza Pública

The latest presidential elections will be taking place this weekend barring any sudden intervention which, this being Guatemala, should not be fully discounted, especially given the events of the last six months. The former vice-President Roxana Baldetti, has now been formerly charged in relation to the La Linea customs fraud. It also seems as if the President himself has been tied to the crime. Otto Pérez Molina, as current president, cannot stand again so the issue of immunity becomes moot once he steps down. What he is prepared to do is anyone’s guess but his ties remain strong to the military in which he served and acted during the Ríos Montt dictatorship.

As the demonstrations provided a countdown to these elections, Pérez Molina finds himself increasingly isolated due to arrests, resignations and flights of key Ministers and backers. Even CACIF seems to have chosen the side of the people, in calling for Pérez Molina to step down, but it would be best not to read too much into this with regard to any ideas of democracy and justice. They, as always, will be looking to maintain their position of power after the upcoming vote. Let’s not forget their posturing following the guilty verdict handed down to Ríos Montt on the charges of genocide and crimes against humanity. They were more worried about the negative perceptions that this might mean outside Guatemala. They felt that bringing heinous criminals to justice does no good for inward investment. Regarding the current customs and welfare scandals and criminality, are they really interested in bringing criminals to justice or do they simply want the demonstrations to stop as it is affecting their bottom line?

As things stand currently, regarding Pérez Molina, a special legislative commission voted unanimously on the 29th August to lift the president’s immunity. The final decision was laid before the full Congress and agreement was reached three days later so that charges can now be filed against him in the criminal court. This went through despite opposition from the President’s party (Partido Popular) and the party of the Presidential frontrunner (LIDER). However, there are a series of legal challenges against the process and it is somewhat expected that he will be protected by any incoming President. At this point, he continues to deny any responsibility and refuses to resign. Not only this, but apparently is accusing the private sector (CACIF?) of complicity in the fraud and has denounced foreign actors’ intervention on the internal affairs of the country. Considering the main thrust of the tax and customs fraud, it is ridiculous to imagine that private sector interests did not benefit from it, and that includes the good burghers of CACIF.

The reference to foreign actors most likely refers to CICIG, whose mandate he had desperately wanted to end but was unable to. It is becoming clear why he was so desperate. The worrying thing is that players in the forthcoming election are also looking to put an end to CICIG’s mandate. This must also be due to criminality – what else could it be? Its mandate currently lasts until 2017 and is sure to be challenged Manuel Baldizón, the Presidential front-runner.

This latest drama comes on the heels of arguably the largest demonstrations seen in Guatemala with over 100,000 gathered in front of the Presidential Palace and tens of thousands gathered in different cities and towns across the country. This took place as a national strike last Thursday, the 27th August. They gathered peacefully, and across classes and ages, to call for the end to immunity for Pérez Molina so that he could face charges.

As for the elections themselves, Guatemalans will go to the polls this Sunday, the 6th, to vote for President and Vice-president, as well as 158 congressional deputies, and mayors and councils for all 338 Municipalities. The presidential run off is scheduled for 20 October 2015 if no winner is declared in September.

A total of 14 political parties have nominated presidential candidates:
Businessman and former congressman Manuel Baldizón, of the Libertad Democrática Renovada (LIDER) is currently leading in the polls. He was the defeated candidate in the run-off in 2011 and past results suggest it is now his turn, although apparently loathed by big business;

Television personality and movie producer Jimmy Morales of the Frente de Convergencia Nacional (FCN), is running in second place in the polls. He is seen as the choice of business and comes under the title of ‘anyone but Baldizón’;

The seeming proliferation of political parties (28 registered in all) should not be mistaken for a thriving democracy. Many represent personal followings to which candidate and voter loyalty is tenuous. Politicians tend to jump from one party to another in a phenomenon called transfuguísmo, a practise that generally hampers efforts to stabilize party leadership, consolidate party identities, create meaningful platforms, and produce incentives for citizens to join parties and form constituencies that can hold candidates accountable. Overall, it tends to inject greater uncertainty into the democratic process. As CICIG pointed out in a July report, Guatemala’s political parties tend to be clientelistic machines that pursue power to extract personal benefits, not to channel broad political demands.

Right now, there is a great sense of achievement among the people of Guatemala but this should only be taken as the first step towards a new democratic spring. A major challenge will be keeping the various groupings together around a common theme. It is much easier for people to rally against something rotten rather than rallying in favour of an idea. Deriving a new consensus will be challenging and I expect that the winner of the election will be striving to ensure that this does not happen. Baldizón is no friend of CACIF, nor vice-versa, so dark and dangerous dynamics look set to oppose any Guatemalan Spring.